Our Team…Working for a Cure 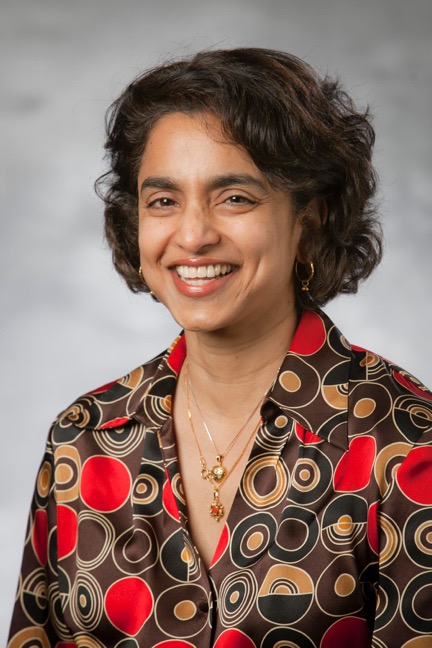 Smita Nair, PhD, has been an official member of The Preston Robert Tisch Brain Tumor Center since 2013, although her collaborations with our brain tumor team started over 15 years ago. Associate Professor of Surgery and Pathology, Nair has spent almost 25 years in the field of cancer vaccines and immunotherapy. She has gained an international reputation as a leader in the field of T cell immunity, specifically in the induction of T cell (immunity cell) responses by dendritic cells. She is a key inventor of a landmark breakthrough that uses RNA-transfected dendritic cells as vaccines.

In Her Own Words

I received my Bachelor’s and Master’s degrees in Bombay, India, and then moved to the United States to study immunology at the University of Tennessee, where I received my PhD. I have been at Duke since 1993, and have been collaborating with Duke investigators, including those from The Preston Robert Tisch Brain Tumor Center. These collaborations started when my colleagues and I established the RNA-transfected dendritic cell vaccine platform. This resulted from a pioneering study in which our group demonstrated that pulsing dendritic cells with unfractionated total RNA isolated from tumor cells stimulates tumor immunity in both murine tumor models and in in vitro human assays. Our team started working with surgical and medical oncologists at Duke to translate this vaccine concept to patients with cancer. My current work aims to combine immunotherapy and immune modulation with targeted cytotoxic therapies (such as radiotherapy, chemotherapy, and virotherapy).

I enjoy seeing novel ideas/strategies transition from concept development, to laboratory bench science, and finally to patients. The most rewarding part of my studies is therefore being able to extend my investigations to patients with cancer, including brain cancer. For instance, I collaborated with John Sampson, MD, PhD, Chair of the Department of Neurosurgery, to develop a novel vaccine for glioblastoma therapy that targets cytomegalovirus (CMV) antigens. Sampson’s team had previously demonstrated that CMV antigens are present in glioblastoma while absent from the normal brain. We demonstrated that T cells stimulated by CMV pp65 RNA-transfected dendritic cells target and eliminate autologous (obtained from the same individual) GBM tumor cells in an antigen-specific manner. CMV-directed immunotherapy is the basis for multiple clinical trials taking place at Duke, and patients seem to be showing positive results (Mitchell et al, 2015 Nature publication and unpublished data).

I have always been fascinated by the study of the immune system (starting during my Bachelor’s studies in India). This is a discipline where one is constantly learning/exploring. Growing up, I read stories by Sir Arthur Conan Doyle (author and physician who introduced us to the fictional detective Sherlock Holmes). Dr. Doyle once said that “There’s no need for fiction in medicine, for the facts will always beat anything you fancy.” This quote perfectly describes the immune system.

Our team at The Brain Tumor Center still has a lot of work to do. This was reinforced when my mother was diagnosed with gallbladder cancer. She passed away soon after (2 months after diagnosis) at 70. My daughter (an 8th grader at that time) expressed her feelings in a poem, where she talks about her Aaji (grandmother).

One more week. I saw her after volleyball practice everyday. We watched Jeopardy each night. I listened to my mother and grandfather talk like this wasn’t happening. I would go to school for six days with the Jeopardy theme song taunting me. Then came Day Seven. We had to wait for what seemed like years as they bathed her like a baby. My dad and I sitting in the waiting room reading about his co-workers achievement in “Killing Cancer with Polio”. I played on my phone until my eyes started hurting. Sitting. Contemplating. I sat in her hospice room staring with big eyes as they cleaned the dried Ensure off her teeth, and watched her sleep and snore louder than my dad, one last time. Listened to her deep breathing one last time. Saw her living face, one last time. Four more words I yelled to make sure she heard. “I LOVE YOU AAJI!”

My dad told me the morning of my wretched tryouts. All I could think of was bawling in her little arms. She ended her life the way it started. Rest in peace my beautiful, talented, loving Aaji.