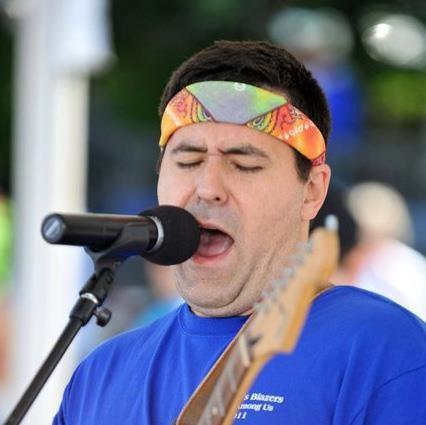 ON JULY 15, 2009, DUKE LAW SCHOOL ALUM and father-of-three Jeff Bradford, then 31, was on his way home from taking an expert witness deposition in Greensboro, North Carolina, when his car was hit by a drunk driver.

In lieu of suing the driver in the aftermath of the accident—his first impulse—the attorney would instead be inspired to form a band and write a song crediting the driver with unknowingly saving his life.

Both drivers came out of the “extremely frightening” accident relatively unscathed, physically.

But the next morning, Bradford woke up with a localized headache on the left side of his head. Thinking it was a concussion, a friend urged him to visit urgent care. But a CT scan, soon followed by an MRI, picked up something else.

“An ER physician with a mediocre-at-best bedside manner informed my wife and me that I had a brain tumor in my frontal left lobe between the size of a golf ball and tennis ball,” says Bradford.

He, along with his wife Andi, also a Duke Law alum, asked around at Duke for a neurosurgeon referral and found Allan Friedman, MD, who, Bradford says, “had the aura of a healer… a neurosurgeon to the stars.”

Following surgery to remove the entire mass, what Bradford described as “a sizable chunk” of the emotional center of his brain, he was diagnosed with a grade-2 oligodendroglioma, a low-grade finger-like tumor. His was caught early enough to be benign. If this type of tumor were to become a fast-growing grade-3, it would be considered cancerous.

Bradford ruled his accident “a miracle,” with the woman who struck his car an unlikely hero. If not for the accident, he may not have discovered he had a brain tumor until it was too late. These kinds of tumors are notorious for forming and growing slowly years before any symptoms are felt, in this way, evading detection.

For the past 10 years, Bradford has performed a rollicking story-song he wrote about his tumor experience.

Eleven years since diagnosis and roughly 40 clear MRIs later, Bradford’s brain shows no evidence of disease. He’s had his “ups and downs” dealing with the mental deficits that can result from brain surgery, but he’s feeling good and is happy to be enjoying time with his family. Like many parents during the pandemic, he’s been busy recently helping his three daughters get through online schooling