2017 Angels Among Us Photos

A Celebration of Hope

The 24th annual Angels Among Us 5K and Family Fun Walk united brain tumor researchers, physicians, caregivers, survivors, and perhaps even angels, for one common cause: to help find a cure for brain tumors. 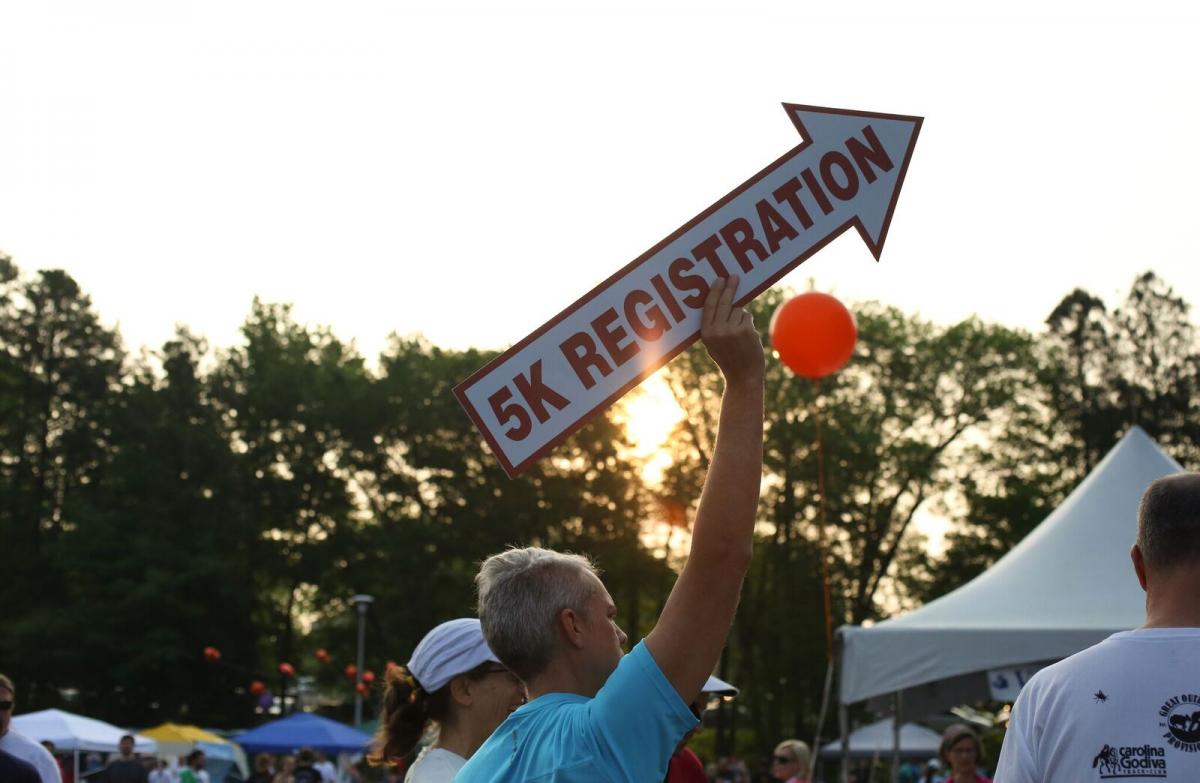 The Angels Among Us event takes a lot of time, people, and organization. Volunteers get there well before the sun comes up. But just as the sun's rays start pouring through the trees, the crowd starts pouring in, too. Angels Among Us is The Preston Robert Tisch Brain Tumor Center's biggest event of the year, because it gives patients, doctors, and perhaps even angels, a time to unite and fight brain cancer together.

Doctors Who Make it Possible 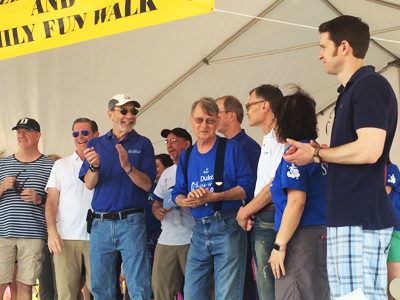 At Angels Among Us, we make sure to celebrate the doctors along with the patients. These dedicated researchers and physicians are the reason why science continues to move forward at Duke. At this moment, all doctors were called up to the stage, including David Ashley, FRACP, PhD; John Sampson, MD, PhD; Henry Friedman, MD; Herbert Fuchs, MD, PhD; Darell Bigner, MD, PhD; Allan Friedman, MD; Annick Desjardins, MD, FRCPC; and Eric Thompson, MD. 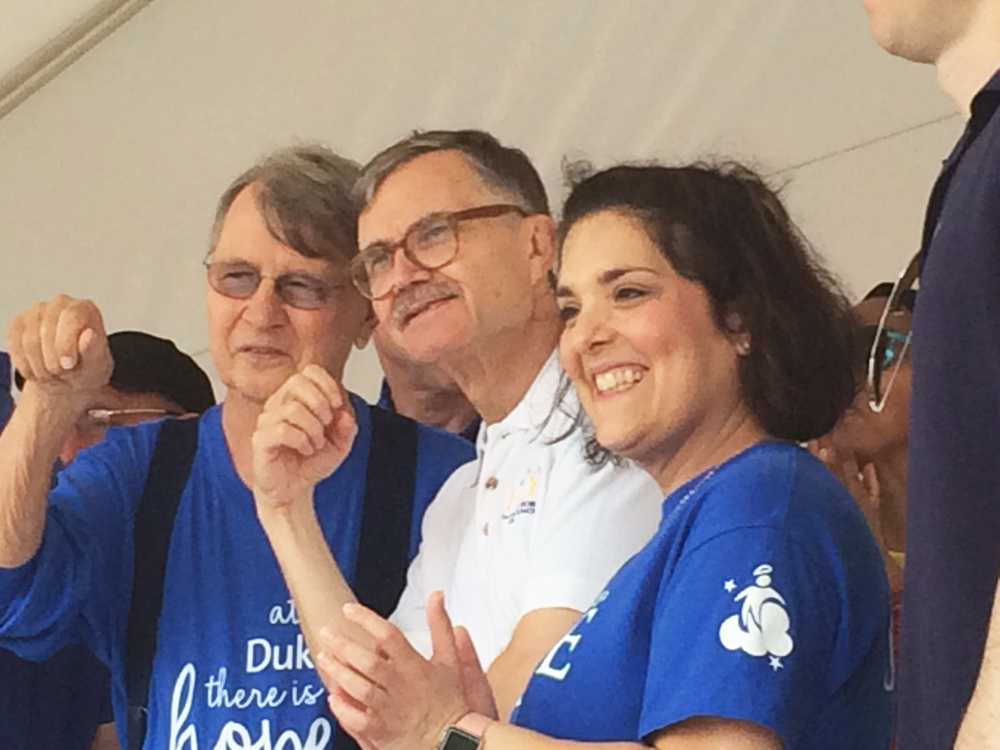 This shot was captured as the total funds raised for the 2017 Angels Among Us event was announced to be more than $2.1 million. The funds raised at this event are particularly important because unlike most other funds (such as grants) given to The Preston Robert Tisch Brain Tumor Center, which have strict policies on how to be used, Angels Among Us funds can be used at the Center's discretion. 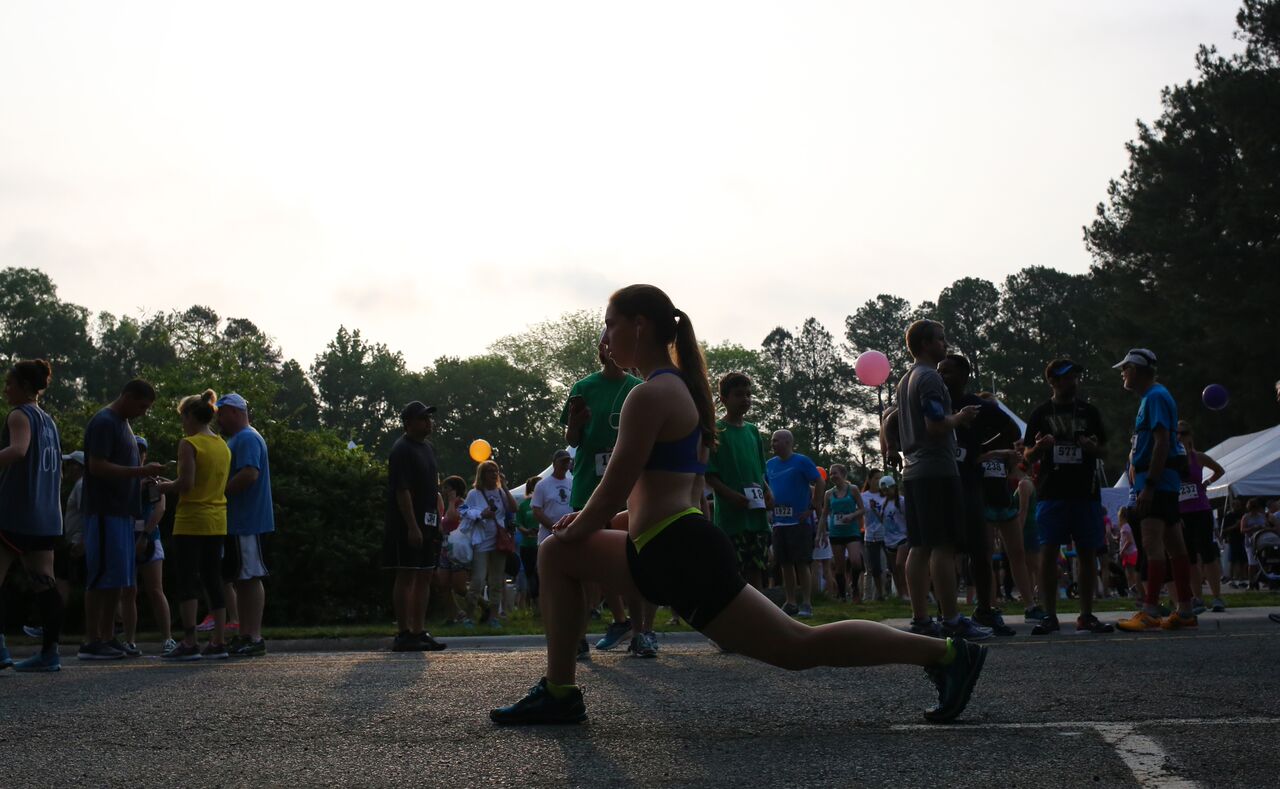 At the Angels Among Us 5K and Family Fun Walk, everyone is welcome, including this runner captured here, stretching before the big race. Though not a patient herself, she tapped into her running skills to help those in her community. You are invited to do the same next year!

Cancer is a Big Fat Doodiehead 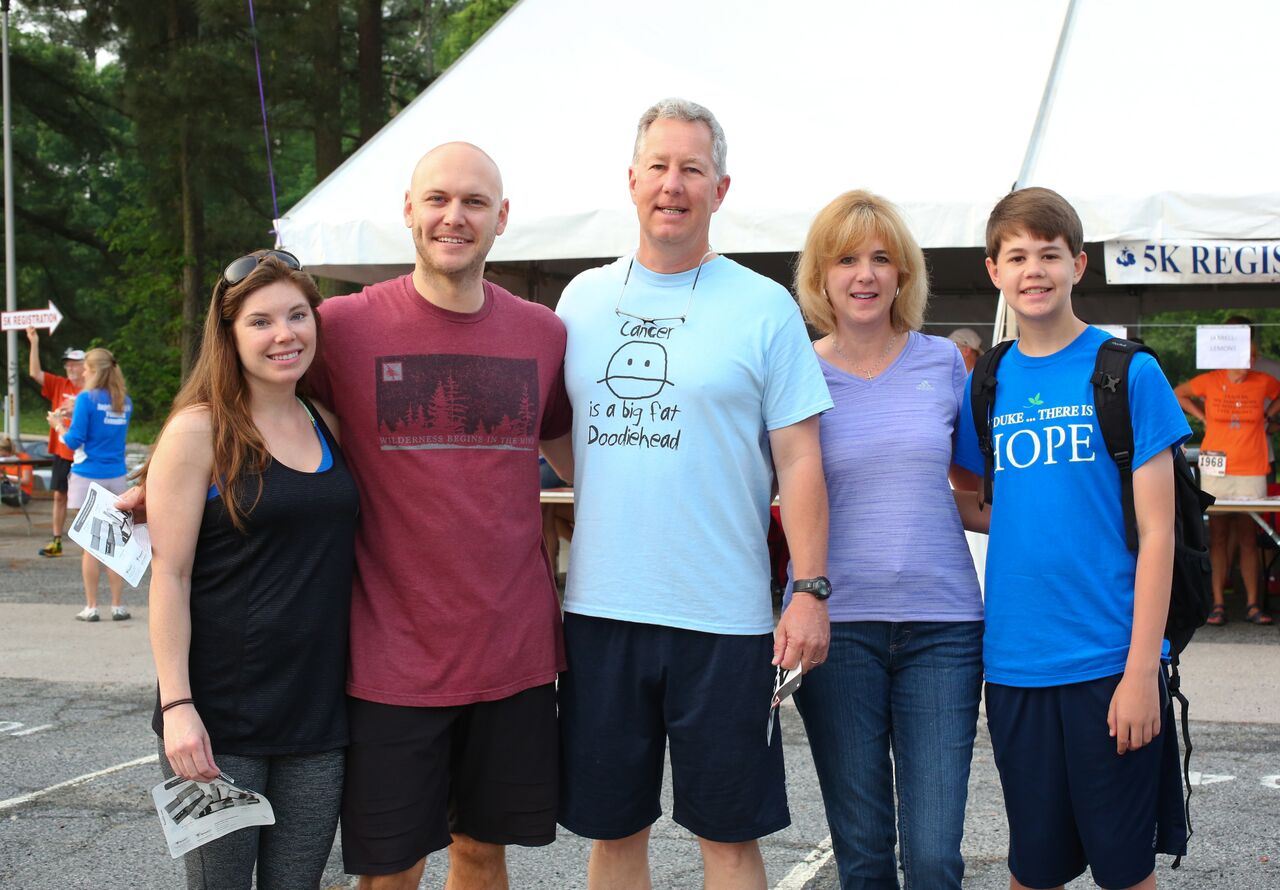 Participants are encouraged to create team t-shirts that symbolize their fight against cancer. It certainly is a sight to see thousands of people modeling apparel of their own design, and every personal motto highlights how people handle their diagnoses differently. Brain tumor survivor David Turno brings his humor to the battle, declaring his motto that "Cancer is a big fat Doodiehead." His family, seen here, agrees. 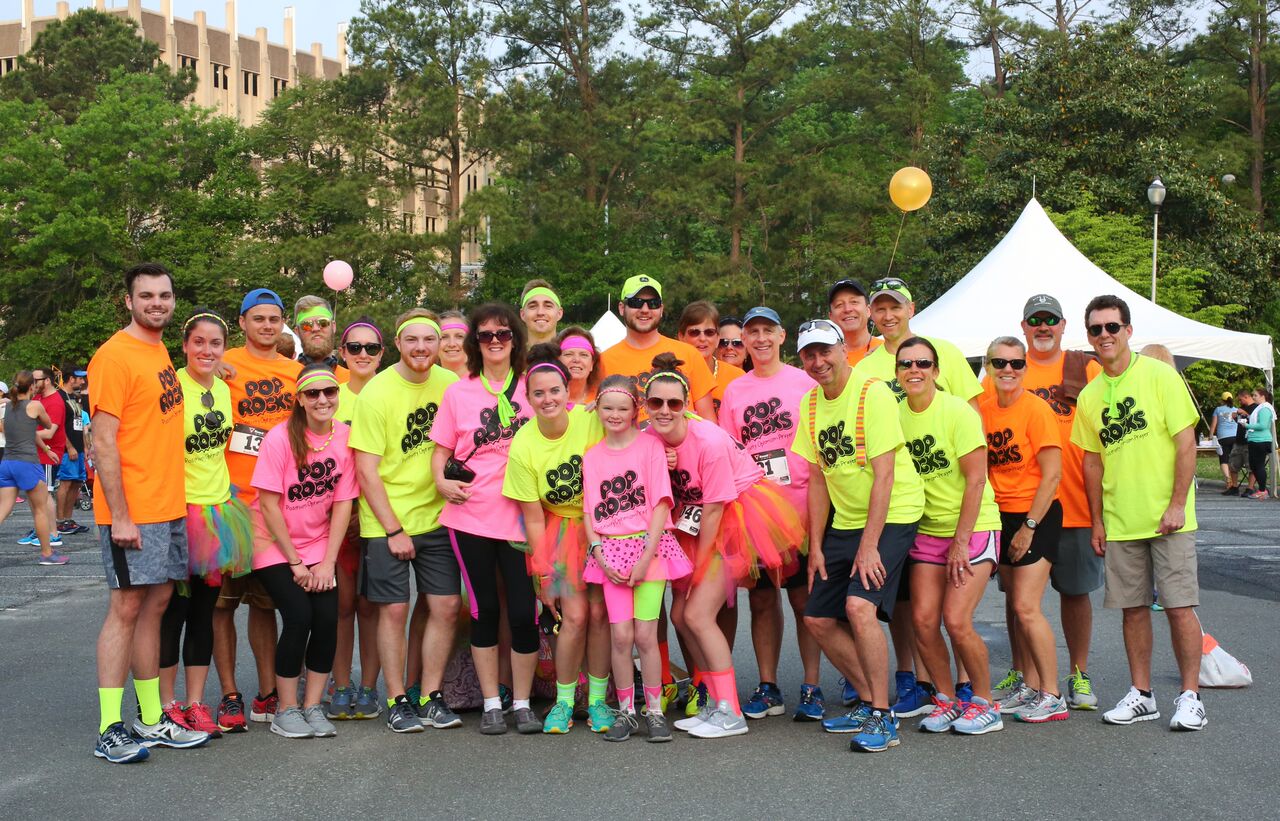 This bunch is led by their fealess leader, Rob Cones (front row, suspenders). Cones was diagnosed with oligodendroglioma back in 2008. He is living proof that at Duke, there is hope, and now only goes to the doctors for check-up's. His family and friends are regular supporters of Angels Among Us, and can easily be spotted at the annual event. Their team name, POP Rocks, stands for Positivity, Optimism, and Prayer.

Team Radcliffe Walks for a Cure 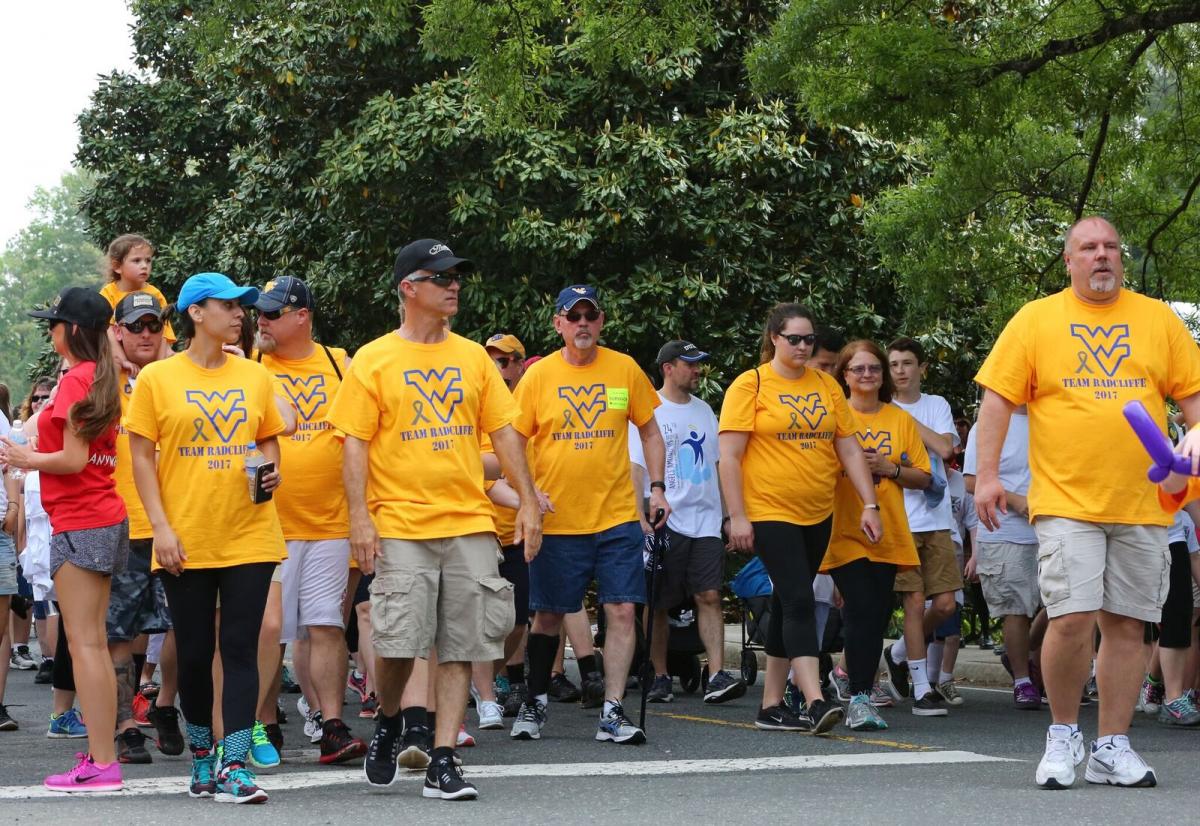 Team Radcliffe walked in support of Richard Radcliffe, who is seen here wearing the blue hat and green "Survivor" tag. Radcliffe was diagnosed with glioblastoma in 2015. The tumor is right on top of the brainstem, and is thus inoperable. Radcliffe is receiving chemotherapy and radiation. He is surrounded by friends and family, including his wife, Trisa Radcliffe. Gabe Stewart (right) and his family drove all the way from Gallipolis, Ohio, Friday night to make it to the Angels Among Us event bright and early Saturday morning. Stewart was diagnosed with glioblastoma back in 2010, and is currently battling a recurrence. He is participating in a phase I trial at Duke that uses a re-engineered poliovirus to kill brain tumor cells. He and his family organized their own annual race, Gabe's Race, that takes place in Ohio every year, in which all proceeds are donated to The Preston Robert Tisch Brain Tumor Center. 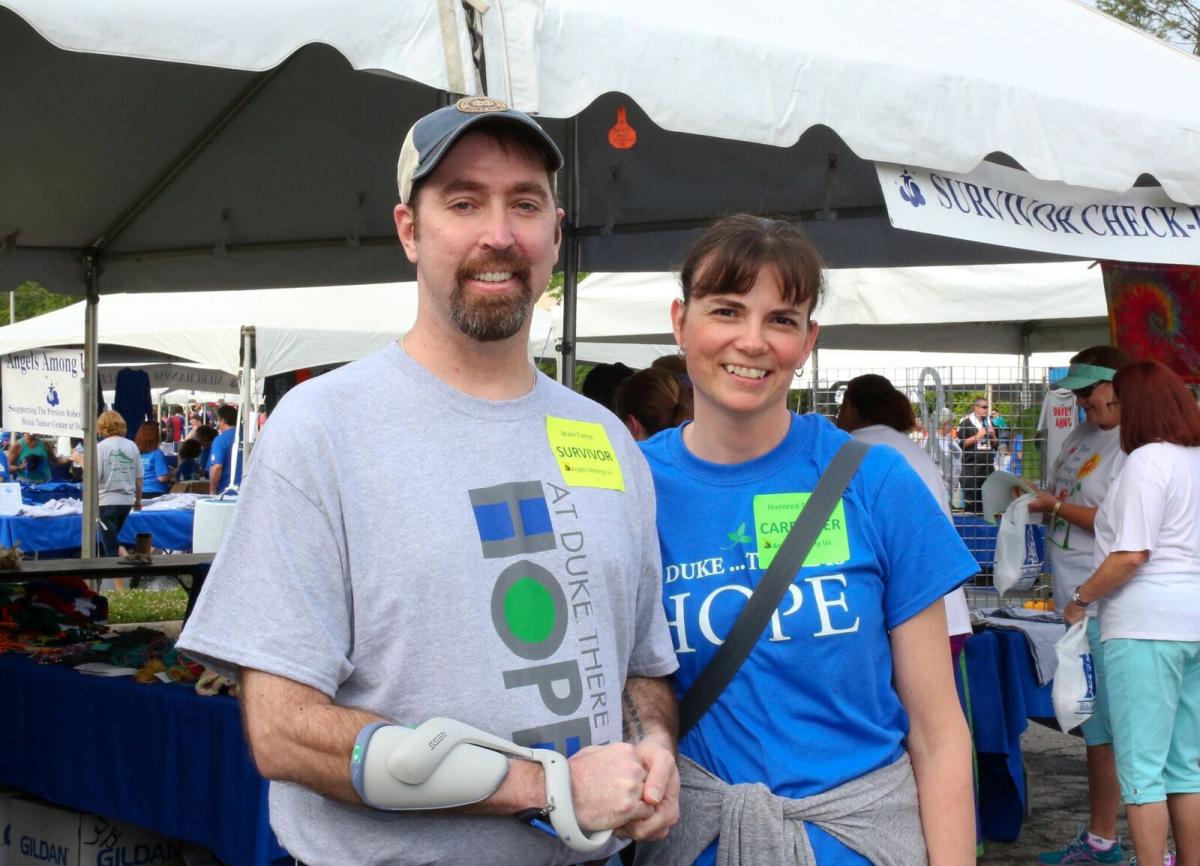 Brendan Steele is another glioblastoma survivor. Glioblastoma is the most common and most malignant type of brain tumor. Steele, who was first diagnosed back in 2010, is currently participating in the poliovirus trial. His wife, Kathy, represents another kind of person Angels Amongs Us celebrates: the caregiver. Sometimes being a caregiver can be overwhelming, and Duke wants to recognize all the love and compassion of both patient and caregiver. 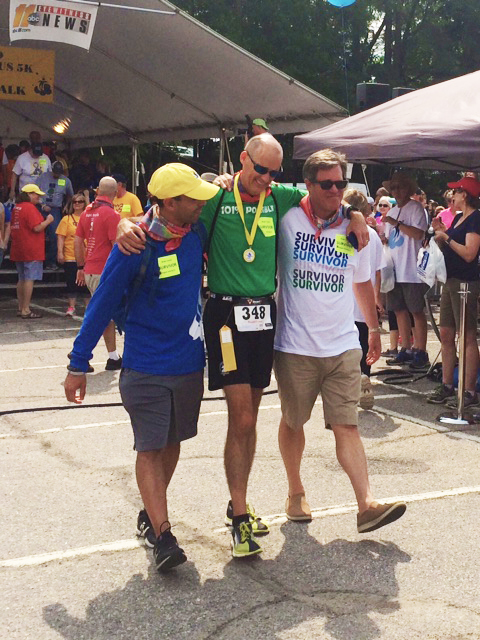 Nestor Paonessa, Tom O'Donnell, and Dave Robison (left to right) are all brain tumor survivors. Walking as one down the survivor's path, the three wrap their arms around each other's shoulders. Each patient is a significant example of how effective the therapies can be here at Duke. These three survivors can teach us so much, especially when it comes to being grateful for another day of life, and living each day to its fullest. 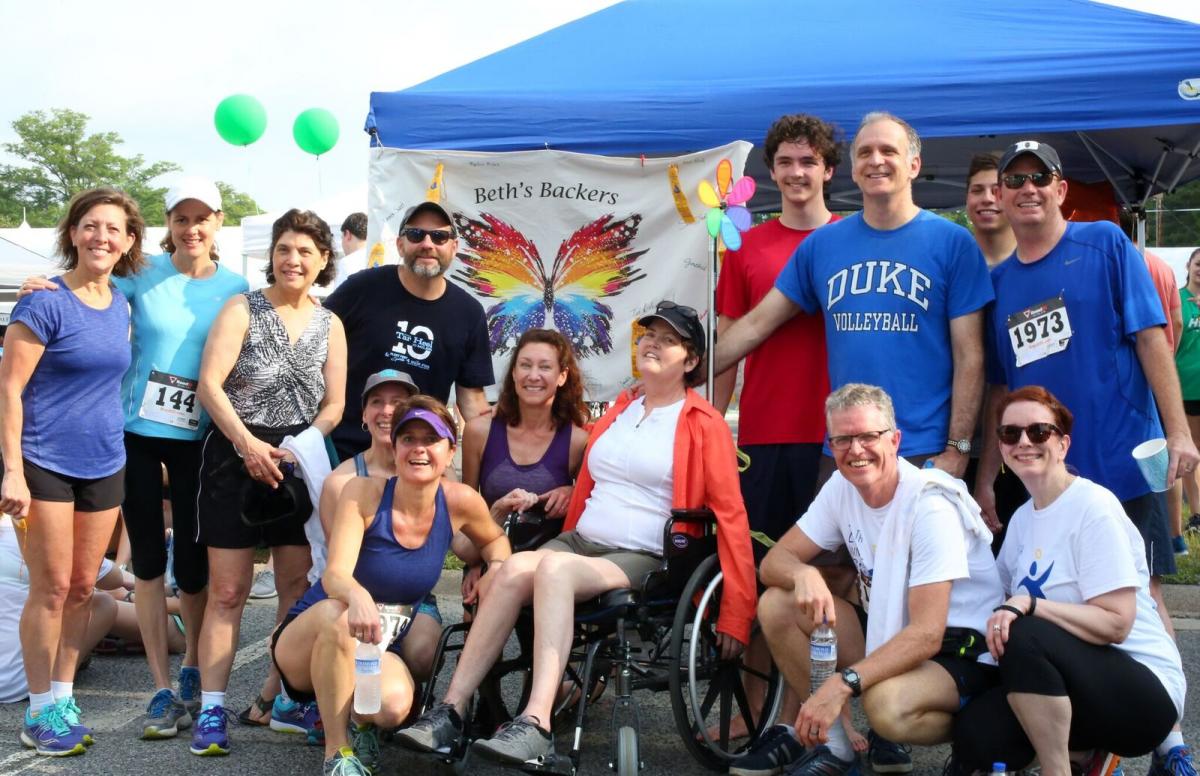 Beth Carlton (orange jacket) was diagnosed with glioblastoma in June, 2015. Her enthusiatic energy and warm smile are testament to her strength, courage, and will to never give up. Carlton, who has to have her coffee and is a big fan of rock band Jethro Tull, is at her best when surrounded by friends. As seen here, it is obvious that she has plenty of them who are willing to back her every inch of the way!

A Doctor and Patient Reunite 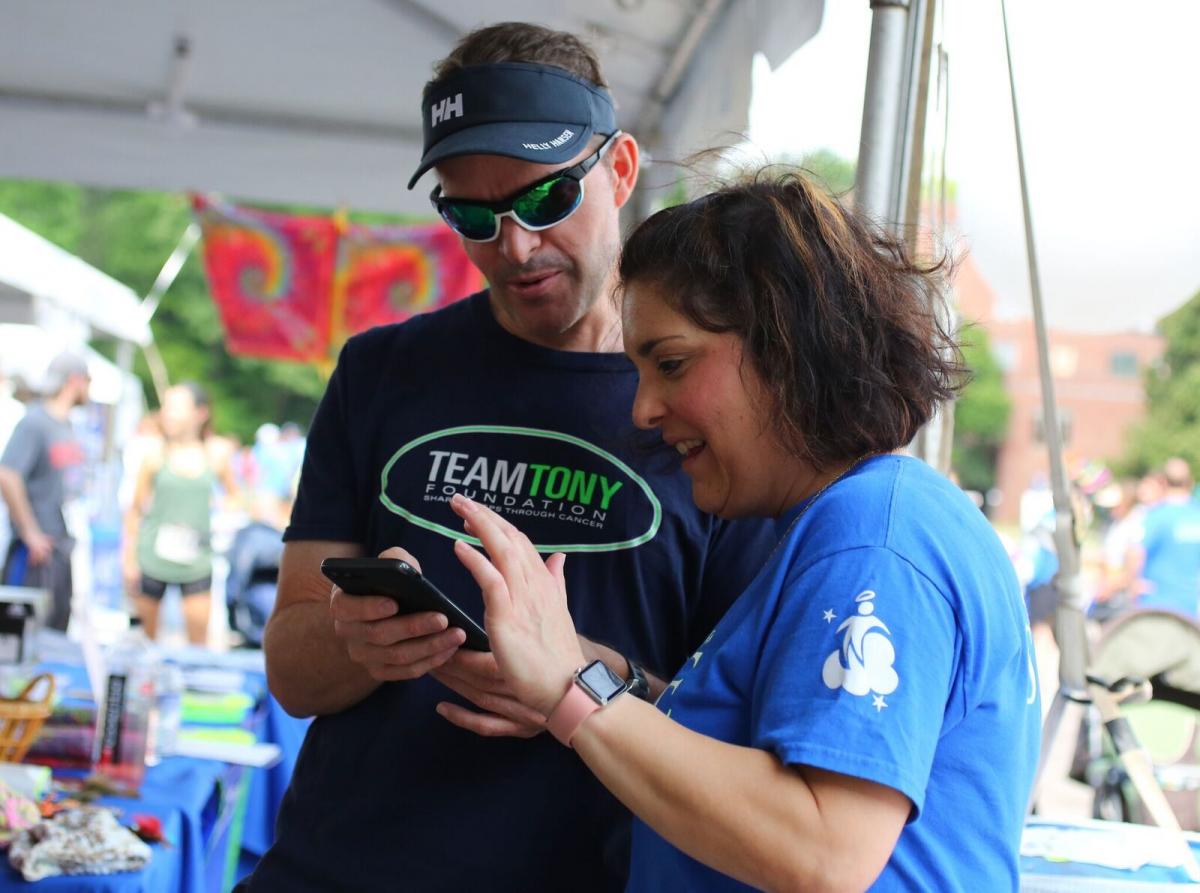 One of the great things about the Angels Among Us 5K and Family Fun Walk is the opportunities it provides for patients and doctors to connect outside of the hospital. Here, we see Tony McEachern, who was diagnosed with an anaplastic astrocytoma 14 years ago, share photos with his physician, Dr. Desjardins. Reconnecting with physicians in a more positive setting helps patients grow closer to their doctors. Right before the countdown to take off, the announcer has the entire crowd shout in unison "We can beat brain cancer." It is enough motivation to get these frontliners moving. The Angels Among Us 5K circles around Duke campus, taking runners along short forest paths and long windy roads. Whether you are a competitive runner or like to take your time, participants of all speeds are welcome to attend next year's event! 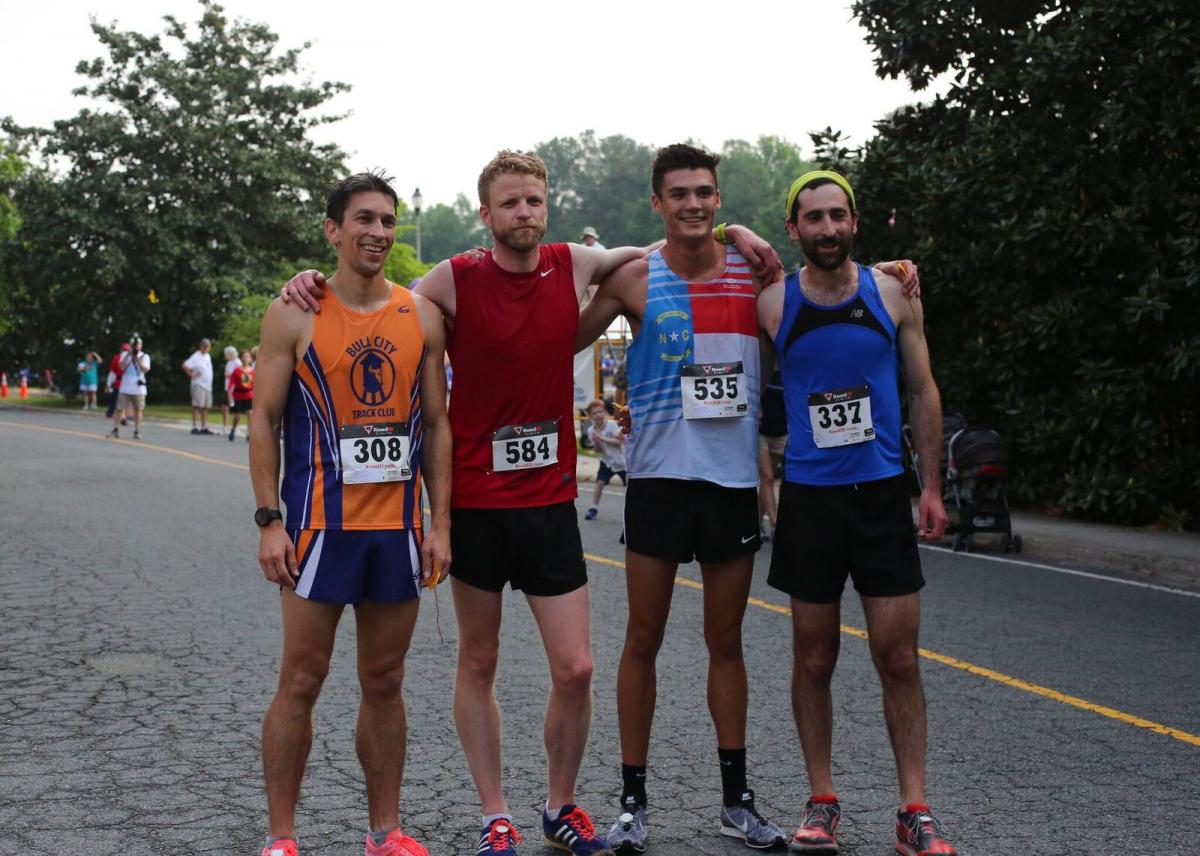 Giving Back Their Tomorrows 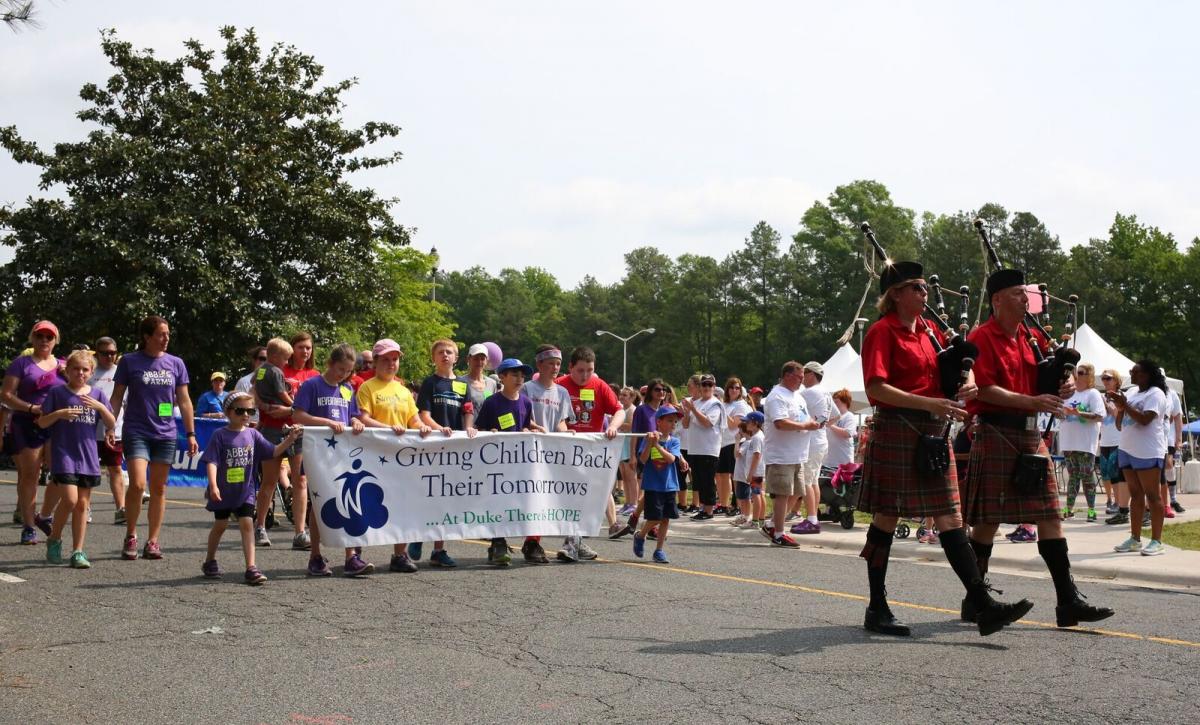 It is hard to imagine a child having to struggle with a brain tumor. But these children seen here are doing just that. Duke understands that children afflicted with this disease need the most advanced kind of care, and a very special type of attention. At Duke, we promise to give every child the best possible chances to live many, many tomorrows. 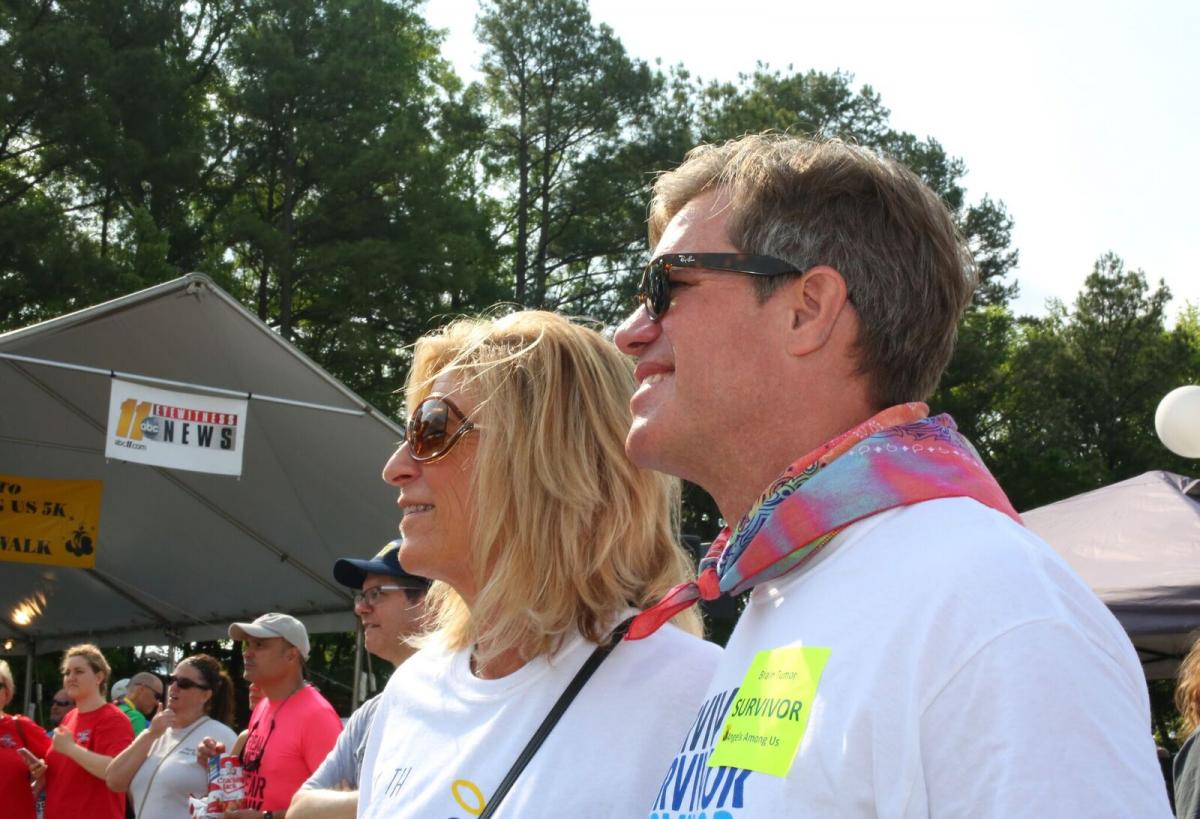 Dave Robison, pictured here with his wife, Toni, is a brain tumor survivor. His team, Toni's Miracle Angels, raised $265,252 this year for Angels Among Us. They were the top fundraiser team this year. The Robisons are active volunteers at The Preston Robert Tisch Brain Tumor Center, and both serve on the Duke Brain Tumor Program Board of Advisors, in which Dave is the Chair. At the Angels Among Us 5K and Family Fun Walk, you see a lot of hugs being given. Tina Albechtsen (tie-dye bandana) hugs her friend during this moving moment. Albechtsen was diagnosed with glioblastoma twelve years ago, and although she is doing great and all smiles now, she comes to the event to raise awareness about her past struggles with a brain tumor, so that others will never have to go through what she and many others went through. Be sure to sign up for next year's event, and be a part of the cure!